Is a Woman's Hair Her Head Covering? 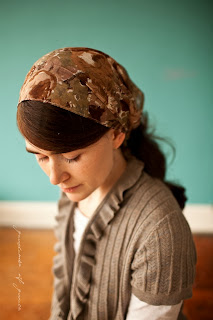 Up until about a year ago, my wife and I had always believed the woman’s covering was just her hair. However, through some of the divine revelations the Lord has given to the Church through His sons and daughters, He has shown us that women should wear a head covering.

For example, I have written about Claire Andoun from Cameroon in my articles, Godly Attire and Adornment -- Seven Divine Revelations and Garments of Godliness. Sister Claire once lived a life of sin and disobedience to the Lord, but now she lives holy for Jesus, and she also wears a head covering.  In the seven divine revelations I have written about, if you watch the videos of sisters Linda and Ayo, you will see they are wearing head coverings.  In that article, I also wrote that sister Olga from Russia said, “My dear sisters…when you come before the Lord, please cover your heads. How can you stay in God’s presence with your heads uncovered?  And you’re not ashamed? Don’t defend yourselves by saying, ‘The Lord says this is only for wives. It’s not for me.’ Sisters, when you come before God, you must cover your heads.”

“But I want you to realize that the head of every man is Christ, and the head of the woman is man, and the head of Christ is God. Every man who prays or prophesies with his head covered dishonors his head. But every woman who prays or prophesies with her head uncovered dishonors her head—it is the same as having her head shaved. For if a woman does not cover her head, she might as well have her hair cut off; but if it is a disgrace for a woman to have her hair cut off or her head shaved, then she should cover her head.”

“A man ought not to cover his head, since he is the image and glory of God; but woman is the glory of man. For man did not come from woman, but woman from man; neither was man created for woman, but woman for man. It is for this reason that a woman ought to have authority over her own head, because of the angels. Nevertheless, in the Lord woman is not independent of man, nor is man independent of woman.” (1 Cor 11:3-11).

If our hair is our covering, then why do we men take off our hats when we pray?  Even Paul refers to this, saying, “A man ought not to cover his head.”  He meant that men must not cover their heads when they pray or prophesy.  He said, “Every man who prays or prophesies with his head covered dishonors his head.” If a man’s covering was his hair, then how could he avoid having his head covered when he prays or prophesies? He would have to shave his head.  However, it’s not speaking about a man’s hair, when it says he ought not to cover his head. Paul was speaking about a man wearing something on his head.

My parents taught me as a child to remove my hat when I entered a church, and I learned in the military to remove my headgear before I began praying or eating.  What would you think if your pastor wore a baseball cap or a cowboy hat while he prayed or preached? I have only ever seen one preacher wearing a hat while he preached, and he looked very strange to me.  It just didn’t seem right.

And speaking of cutting off a woman’s hair, it’s very common today for women to wear short hair like men.  But Paul wrote, “It is a disgrace for a woman to have her hair cut off or her head shaved.”  He was using the natural order of things regarding men and women’s hair, in order to teach a spiritual lesson. As is the natural, so is the spiritual.  Just as it is a disgrace for men to wear long hair and women to wear short hair, so men must not cover their heads when they pray or prophesy, while women should in fact cover their heads during these special times in the Lord’s presence.

“Christ is the Head of the man and man is the image and glory of God. The man is the head of the woman and the woman is his glory. During worship: prayer, prophesying or preaching, the man should not cover his head. During this formal period, Christ is the One in headship and God's glory is to be seen. If a man covers his head at this period, it shows he has covered the headship of Christ and the glory of God. During this formal period, man is not in focus, he is not in headship and the glory is not his but God's, hence his headship and glory are to be covered. This is visibly done by the veil on the woman's head. Angels who minister to the saints during worship expect submission to this rule by Christ's followers. Outside this formal period, the wearing of any kind of veil by man is not an offence as long as it befits a believer and does not transgress the law of decency.”

“Similarly, outside this formal period, the woman is not under obligation to be veiled. This is because her long hair ‘Is a glory to her for her hair is giving her for a covering.’ Covering her head with a veil is only required during worship, after which she is at liberty to leave her head uncovered by a veil. Her hair could be seen on her to her glory in her normal living. Her hairdo must be decent and befitting to a believer. She must avoid hairdo that changes her hair from the natural to unnatural. That will be lying against the truth and grieving the Holy Spirit. She must not plate gold or items of beauty and fashion into her hair. She should avoid the use of jewelry and the art of dressing for show.”

I agree with brother Michael’s view on this.  My wife and our daughters have found a place called Garlands of Grace, that makes beautiful head coverings for women, like the ones pictured in this article, and all the ladies in our house look pretty in them.

An evangelist named brother Ezekiel Moses has been to heaven and hell and back, and received many revelations from the Lord.  I have published his testimony in my article Ezekiel Moses Testimony of Heaven and Hell and spoken with him by phone. The Lord also said something to him, which is not mentioned in this video.  He said to brother Ezekiel, "Can a woman pray without covering her hair?  Think about it."  That is essentially the same question the Holy Spirit asked through the apostle Paul, who wrote: "Judge for yourselves: Is it proper for a woman to pray to God with her head uncovered?" (1 Co 11:13).  Ezekiel says the Lord specifically told him women must cover their hair when they pray, and honor God, as it says in 1 Corinthians 11:3-11.

I once shared these verses with a sister in Christ, who had asked me why my wife and daughters cover their heads, and the next day she wrote to me saying, “I read the verse you gave me and now I understand, that there should be another covering other than the hair. Then when I went to bed, I kept dreaming of someone telling me over and over that woman should cover her head when praying. And the person quoted 1 Peter 3 as the other verse I should read. Whether this was from the Lord or my mind, I don’t know. But today for the first time in my life, I covered my head when I went to church and it just felt right.”

Each person has to hear from the Lord on this.  But if you really want to know what pleases Him, and you seek Him about it, He will lead you into all Truth.  So please prayerfully consider these things.

Attribution notice: Most Scripture quotations taken from the NASB. Most other Scriptures taken from The Holy Bible, New International Version® NIV®, unless otherwise noted. Photos of the woman  and the girl with head coverings, courtesy of Garlands of Grace.

Author's note: Also see Godly Attire & Adornment -- Seven Divine Revelations, Rachael Mushala Testimony of Hell, Michael Thomas Sambo's Revelation of Heaven and Hell, Sister Ayo - a Revelation of Heaven and Hell, Restored Truth, The Highest Form of Slavery, and Walking in the Perfect Will of God. I also recommend Ten Articles on Modest Apparel by Free Grace Broadcasters.  You can find my complete collection of blogs at Writing for the Master.

Len Lacroix is the founder of Doulos Missions International.  He was based in Eastern Europe for four years, making disciples, as well as helping leaders to be more effective at making disciples who multiply, developing leaders who multiply, with the ultimate goal of planting churches that multiply. His ministry is now based in the United States with the same goal of helping fulfill the Great Commission. www.dmiworld.org.
Posted by Len at 7:28 PM