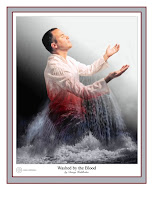 I want to talk to you about something we don’t hear much about any more, which is the conscience. This is one of the faculties of perception that God has given to each human being. Not only do we have our five, natural senses, which enable us to taste, touch, see, smell, and hear, we also have the ability to know right from wrong. We have this ability to consider whether something is good or evil and be conscious of it. In other words, we can be aware of what we are doing or thinking, and at the same time know if it is morally right or wrong. It’s like a built-in heat detector or fire alarm, which God gave us for our protection.

Bearing Witness to Right and Wrong
You conscience will bother you when you have sinned. “It came about afterward that David's conscience bothered him because he had cut off the edge of Saul's robe.” (1Sa 24:5)

Your conscience will also bear testimony to you, when you have conducted yourself in holiness and godly sincerity, so that you can be confident that you have done so. “For our proud confidence is this: the testimony of our conscience, that in holiness and godly sincerity, not in fleshly wisdom but in the grace of God, we have conducted ourselves in the world, and especially toward you.” (2Co 1:12)

“And keep a good conscience so that in the thing in which you are slandered, those who revile your good behavior in Christ will be put to shame.” (1Pe 3:16)

A Clear Conscience Does not Acquit You
While Paul emphasized the fact that he maintained a clear conscience, he acknowledged that it alone did not mean he was innocent. He declared that Christ was His judge. “For I am conscious of nothing against myself, yet I am not by this acquitted; but the one who examines me is the Lord.” (1Co 4:4). Therefore, while a clear conscience is important, it does not guarantee you are innocent. You must still stand in judgment before the Lord, and He will examine you.

Tending to Your Own Conscience
One reason we submit to both secular and spiritual authorities is for the sake of conscience, and the other reason is to avoid wrath. “Therefore it is necessary to be in subjection, not only because of wrath, but also for conscience' sake.” (Rom 13:5)

Your conscience can be weak, when it is not properly strengthened by God’s grace and the knowledge of the truth. And committing sin will defile any conscience. “However not all men have this knowledge; but some, being accustomed to the idol until now, eat food as if it were sacrificed to an idol; and their conscience being weak is defiled.” (1Co 8:7)

Sometimes it is better not to know too much about the prior history of the meats we eat, or else we may learn of something that prohibits us from eating it, and that our conscience would be offended if we ate it with that knowledge. So don’t ask questions about the meat. “Eat anything that is sold in the meat market without asking questions for conscience' sake…If one of the unbelievers invites you and you want to go, eat anything that is set before you without asking questions for conscience' sake.” (1Co 10:25,27)

Tending to the Consciences of Others
When Paul said that you should not eat it for conscience’ sake, he meant that you would be sinning if you ate it, since the other person knows you are not supposed to eat it, and if you do eat it, their conscience would be emboldened in an ungodly way by your bad example. Paul said, “I mean not your own conscience, but the other man's; for why is my freedom judged by another's conscience?” (1Co 10:29)

Live your life in such a way so that you can commend yourself to every man’s conscience in God’s sight, meaning you avoid sin, shameful secrets, and the mere appearance of evil. “But we have renounced the things hidden because of shame, not walking in craftiness or adulterating the word of God, but by the manifestation of truth commending ourselves to every man's conscience in the sight of God.” (2Co 4:2)

Your Conscience Can Become Seared
You need to take good care of your conscience, and don’t ignore it, because it can become seared from repeated overheating, and then it won’t work correctly any more. “By means of the hypocrisy of liars seared in their own conscience as with a branding iron.” (1Ti 4:2). Once a person’s conscience has been seared, it is like when an animal has been branded. Just as the animal hide that is seared by branding with a hot iron cannot be restored to its original condition, the conscience cannot be restored back to its original condition after it has been seared, except by a miracle of God’s grace. This is a fatal mistake, because without a properly functioning conscience, a person cannot even repent. And if they cannot repent, they cannot be forgiven.

Relationship Between Baptism and Conscience
There is a connection between water baptism and conscience. Which comes first, baptism or a purged conscience?

In speaking of Noah’s ark and the flood, Peter said, “Corresponding to that, baptism now saves you--not the removal of dirt from the flesh, but an appeal to God for a good conscience--through the resurrection of Jesus Christ, who is at the right hand of God, having gone into heaven, after angels and authorities and powers had been subjected to Him. (1Pe 3:21-22)

John Wesley said it best like this in his comments on 1Pe 3:21-22: “That is, through the water of baptism we are saved from the sin which overwhelms the world as a flood: not, indeed, the bare outward sign, but the inward grace; a divine consciousness that both our persons and our actions are accepted through him who died and rose again for us.”

The Blood of Jesus Purges the Conscience
It is the blood of Christ that cleanses, purges, or purifies your conscience, not water baptism. “For if the blood of goats and bulls and the ashes of a heifer sprinkling those who have been defiled sanctify for the cleansing of the flesh, how much more will the blood of Christ, who through the eternal Spirit offered Himself without blemish to God, cleanse your conscience from dead works to serve the living God?” (Heb 9:13-14).

As the sprinkling of animal blood formerly cleansed the flesh of the worshipper, the blood of Christ now cleanses your conscience. One must obtain a purged conscience before water baptism.

We do not receive a purged conscience from water baptism, but from the sprinkled blood of our great high priest, Jesus Christ.

“Therefore, brethren, since we have confidence to enter the holy place by the blood of Jesus, by a new and living way which He inaugurated for us through the veil, that is, His flesh, and since we have a great priest over the house of God, let us draw near with a sincere heart in full assurance of faith, having our hearts sprinkled clean from an evil conscience and our bodies washed with pure water.” (Heb 10:19-22)

Without the blood of Jesus applied to our hearts and the waters of baptism applied to our bodies, we would not have confidence to enter the holy place; we would not be able to draw near with a sincere heart in full assurance of faith. It is the sprinkled blood that purges our hearts from an evil conscience, and it is the water that washes our bodies. That is the proper, Scriptural order – first the blood-sprinkled conscience, then the washing of the body. Therefore, when a person is water baptized, it is the godly, biblical way of responding to the cleansed conscience he has already received.

Putting it All Together
While God has given us each a conscience, through which we are conscious of right and wrong, we have all defiled it through sin before coming to know Christ. There is none righteous. But when you repent and give your life to Jesus, His blood purges your conscience. You are not guilty, because you’ve accepted the atonement, not only because of a purged conscience, but because of destroyed records. In His great mercy, God forgives all your past sins, destroys all the records of them, and remembers them no more. This is a miracle of God’s amazing grace in your life.

Once you have received a good conscience through repentance and faith in Christ, then you should be baptized with water. That is an outward ceremony expressing the grace that you have experienced in our heart. It’s the answer of a good conscience.

But then you need to keep a good conscience all your life from that point forward. Now your conscience must be trained by and taken captive by the Word of God. You need to take care to maintain a clear conscience toward God at all times, so that it does not become defiled.

Going against your conscience is neither right nor safe. Neglecting your conscience, and ignoring its warnings, leads to it eventually becoming seared. In that case, it no longer works correctly, and we lose the benefit of its protection. That’s why you need to listen to your conscience, acting according to its dictates, and always do what is right. If at any point you commit a sin, you should immediately repent and receive a cleaning in our conscience once again. This will help to keep it in good working order, functioning properly as it should, so that you can live a blameless life before God in Christ and make it to heaven.

Attribution notice: Most Scripture quotations taken from the NASB. Other Scriptures taken from The Holy Bible, New International Version® NIV®, where noted. The "Washed by the Blood" painting © 2012 is by Danny Hahlbohm, all rights reserved by the artist.

Author's note: I also recommend reading Repentance That Leads to Life, Bowing Low in Worship, Sins That Will Keep You From Heaven, Ask for the Ancient Paths, The Forgotten Sin of Worldliness, Should you fear the Lord?, Ezekiel Moses Testimony of Heaven and Hell, The Judgment Seat of Christ, Tattoos and Body Piercing, Divorce -- Three Divine Revelations, Alcohol and Cigarettes -- Ten Divine Revelations, Rock, Rap, and Reggae Music -- Six Divine Revelations, Godly Attire and Adornment -- Seven Divine Revelations, and The Book of Life. You may access the Main Directory for this Seeking the Lord blog for more articles like this, as well as my complete blog directory at "Writing for the Master."

Len Lacroix is the founder of Doulos Missions International.  He was based in Eastern Europe for four years, making disciples, as well as helping leaders to be more effective at making disciples who multiply, developing leaders who multiply, with the ultimate goal of planting churches that multiply. His ministry is now based in the United States with the same goal of helping fulfill the Great Commission. www.dmiworld.org
Posted by Len at 8:46 AM