Ignorance is Not Bliss 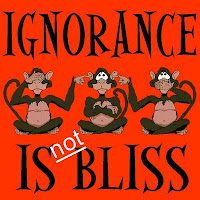 Jesus said, "That slave who knew his master's will and did not get ready or act in accord with his will, will receive many lashes, but the one who did not know it, and committed deeds worthy of a flogging, will receive but few." (Luk 12:47-48a)

He taught that the one who does not know his Master's will and does things deserving punishment will still be beaten. He does not get a free pass because of his ignorance. Granted he will be beaten with few blows, but he will still be beaten. Certainly his punishment will be less severe than that of the one who knew his Master's will and did not act in accord with it, but he will still be punished. Moreover, the Lord did not say the punishment would be temporary, but that it would be less severe, which teaches us that there are varying degrees of punishment in hell for different people. Everyone condemned to hell remains there forever, but they are punished at a level appropriate for their deeds.

This is one of The Apostasy Parables, as I explained in my article by that name. It depicts a servant of the Lord, who believes in his heart that the Lord will not come back for a long time, and who begins to beat the other slaves he was supposed to care of, and begins to eat and drink, and get drunk. Here is the full context, including Peter's question about the previous parable, in which he asked the Lord whether the parable about the servants waiting for their master to return from the wedding banquet was addressed to the disciples only or to everyone else.

Peter said, "Lord, are You addressing this parable to us, or to everyone else as well?" And the Lord said, "Who then is the faithful and sensible steward, whom his master will put in charge of his servants, to give them their rations at the proper time? "Blessed is that slave whom his master finds so doing when he comes. "Truly I say to you that he will put him in charge of all his possessions. "But if that slave says in his heart, 'My master will be a long time in coming,' and begins to beat the slaves, both men and women, and to eat and drink and get drunk; the master of that slave will come on a day when he does not expect him and at an hour he does not know, and will cut him in pieces, and assign him a place with the unbelievers. "And that slave who knew his master's will and did not get ready or act in accord with his will, will receive many lashes, but the one who did not know it, and committed deeds worthy of a flogging, will receive but few. From everyone who has been given much, much will be required; and to whom they entrusted much, of him they will ask all the more. (Luk 12:41-48).

In this parable, as I have already said, the Lord taught that He will punish His servant, who is not faithful and sensible, and who falls away from Him. He will cut him in pieces, and assign him a place with the unbelievers. So we learn from this parable that ignorance of God's will is no excuse. The Lord will not spare the servant who does not act in accordance with the Lord's will, and who claims he did not know, but will still punish him.

This should put the fear of God into us, and make us want to read the Scriptures prayerfully to know the Lord's will, so that we are not ignorant. We should find out what pleases the Lord and do it. We should seek wisdom, understanding, and the knowledge of God. We should seek to put His Word into practice.

Imagine a person who has at one time come to know the Lord and been saved. He owns a Bible, but does not read it, or at least not very often. He has plenty of time to watch TV, listen to music, surf the internet, spend time on Facebook, spend time hanging out with his friends, and exercise. But he doesn't make time to read the Word of God. Therefore, he misses out on the warnings that God wanted to give him, and he lives in a way that is not in accord with God's will. In the end, he will perish, and it will be his own fault, because he made a choice to do other things rather than read the Scriptures, and by his own actions he demonstrated in his lifetime what was priority for him. God will take that into account at the final judgment, and based on what Jesus taught, we have no reason to believe that such a person will escape hell.

If you don't read your Bible much, let me encourage you to begin doing so now, and to put it into practice. I hope you will take this message seriously and read the Scriptures daily. And for those who already do read the Scriptures, the warning is even more serious, because if you fail to do the will of God that you know you should do, then you will be punished more severely. That would apply especially to people like pastors, teachers, and preachers, who are supposed to be feeding God's people the Word of God. We will be judged more strictly (Jas 3:1), so let's fear God and take heed to this warning.
Attribution notice: Most Scripture quotations taken from the NASB.

Author's note:  Also see Sins That Will Keep You From Heaven, An Open Mind that Loves the Truth, The Top Ten Things Jesus Taught, The Apostasy Parables, Drifting Away, Should you fear the Lord?, Walking in the Perfect Will of God, Deleted Scriptures in the Bible?, Is Obedience Optional?, Wisdom for Wealthy Preachers and Prosperity Teachers , The False Gospel of Eternal Security, The Conditional Security of the Believer, Overcomers in This Life, Rock, Rap, and Reggae Music -- Five Divine Revelations, Garments of Godliness, Godly Attire and Adornment -- Seven Divine Revelations, The Judgment Seat of Christ, Faith Works!, Avoid Becoming a Corrupted Christian, Holding Fast the Faithful Word, Walking in the Perfect Will of God, Only the Holy -- Three Shocking Testimonies, Keeping Sundays Holy, Pleasing the Lord, and Is Tithing Required?

You can access the Seeking the Lord Main Directory or my complete blog directory at "Writing for the Master." Now I'd like to ask a very important question.

Len Lacroix is the founder of Doulos Missions International.  He was based in Eastern Europe for four years, making disciples, as well as helping leaders to be more effective at making disciples who multiply, developing leaders who multiply, with the ultimate goal of planting churches that multiply. His ministry is now based in the United States with the same goal of helping fulfill the Great Commission. www.dmiworld.org.
Posted by Len at 5:55 PM